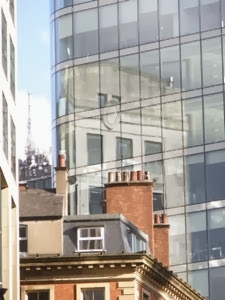 I know a city where everyone is drunk because the alcoholic drink is free. This means that the town has real difficulty doing the simplest of buildings like a drunk struggles to do up shoelaces. It can only build one building at a time but completely forgets about the buildings it has just finished. Like a drunk it has lost the keys to its own front door as it does not really have any idea how to plan its space and doesn’t care about what style of architecture appears on its streets.

Because it is easily persuaded of the latest novelty, each of its buildings is different example of a building type, like a children’s textbook of architectural styles. However the rule of this particular city is that every building must be the same size as the one next it. All the buildings look quite nice from the front. But the architects were either not paid or forgot so they have no backs at all except visible service pipes and broken windows; in this city you should never look at the backs of any of its buildings.

The oldest of the buildings are made of brick and ceramic tiles. These were designed for a city that used to have lots of ceremonies and processions where everyone would dress up as a historical character and the wealthiest people would stand on balconies and wave. These early buildings are very self conscious about status and class. These buildings really wanted to be great European cathedrals but were in reality only insurance companies. The builders preferred to impose moral instruction on those who used them, using difficult to see lettering, mostly in Latin. They wanted the buildings to teach good manners and good morals to everyone who went in and out or who walked past them. Sometimes the builders wanted to dress their buildings as if they were from a long lost world of chivalry. These highly decorated fantasy buildings were mostly made from an inner skeleton of iron, but this is all kept hidden from public sight because it would have looked lower class.

The Victorian buildings were superseded by the next post-war generation who did not like styles and wanted architecture to look like colossal repetitive packaging units, similar to egg boxes. This new generation specially hated the inscriptions and moral saints. These modern buildings have nothing to say in terms of written inscriptions except the word “push” on the door. The very recent buildings from the 1990s only use windows because they hate walls because they are a reminder of the snobbish and class ridden Victorian and Edwardian buildings.They are glass boxes who don’t even want to be buildings at all, constructed for employees to make their photocopies in. It is a strange irony that the furniture that you will find inside of all the 3 different generations of building is exactly the same for each, whatever period they were built. It should also be noted that this city is particularly bad for people who walk, because it rains every day of the year, which destroys their shoes. So the pedestrians have to get out of their cars to buy shoes. All the shops in this town sell shoes. Or cars, which can sometimes look like big shoes when seen from a distance

Finally, two old serpents live in this town. One is a canal and the other is a railway line. The railway is a very friendly, welcoming place and is full of very happy drunk people looking for love. The canal is vengeful. The canal is unhappy because it is ignored by the happy drunken people looking for love. So it occasionally snatches a victim who drowns in the cold waters. The city has no subway like other European cities. Because it forgot to, in its pride it thought it would not need an underground but preferred to surround itself with large and small roundabouts like a sort of medieval theme park where the best rides require the drivers to go round and round in circles, which used to be seen as great fun many years ago. David Chandler
Posted by EAMONN CANNIFFE at 12:16