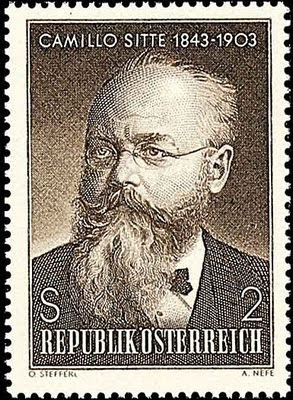 Sitte’s book “City Building According to Artistic Principles” established basic principles of urban design. He strongly criticized the modern city planning that valued logic and mathematical solutions over artistic considerations. He considered contemporary gridiron subdivisions as monotonous and leading to the maximizing of land exploitation.    He considered the proportions of town squares, monuments, and churches. Planning should be a creative art and the interplay between public buildings and open spaces was paramount to good planning.

The relationship between buildings, monuments and their plazas
Sitte emphasized that the centre of plazas must remain permanently vacant, simply because of the desire to leave the line of vision free and not blocked by monuments. Otherwise, in his opinion, not only would such monuments interfere with the view of buildings but the buildings would present the worst type of background for the monuments.
He also criticized the way of building churches or public buildings in the centre of the plazas, because they spoiled the view of the plaza and there would be no adequate space distance to see the façade of the building very well. Simply he called this as representing a lack of judgment.

Proportional relationship between the buildings façade and the dimensions of the squares
In a very large square the mutual relationship between the plaza and its surrounding buildings dissolves completely, and they hardly impress one as a city plaza. However, he admitted that this kind of proper relation is a very uncertain matter, since every thing appears on the subjective viewpoint and not at all on how the plaza appears in plan, a point which is often overlooked.

The size and shape of plazas
According to Sitte’s classification there are two categories of city squares, the deep type and wide type, and to know whether a plaza is deep or wide the observer needs to stand opposite the major building that dominates the whole lay out.
Thus Piazza S.Croce in Florence should be regarded as a deep plaza since all of it is components are designed according to their relationship to the main façade. So the classification is not about dimensions but is dependent on the relationship between the plaza and its surroundings.

Streets and visual succession
Streets in old cities have grown through the gradual development of the main routes of communication leading from countryside to their organic centres, therefore avoiding an infinite perspective view by the frequent displacing of the axis.
An examples for this is the Rue des Pierres in Bruges leading from the Grand Place to the cathedral of Saint-Sauveur. There is nothing of the uniformity of modern streets and all the façades pass in succession before the eye. Another example is Breite Strasse at Lubeck where a steeple dominates the entire street. For the pedestrians walking along the street the steeple is brought out at one moment. Afterwards it disappears again and the structure of the church never dominates the view because of the curving street path.
It is necessary to emphasize that straight streets cannot offer such scenery. Therefore the lack of this kind of charming route and visual succession is one of the reasons which has lead to the lack of picturesque effects in our modern urban plans.

Modern cities
In Sitte’s view the main problem of contemporary planning was the ignoring of aesthetic values and the absence of concern with city planning as an art. It was increasingly treated as only a technical problem with the straight lines and right angles of the gridiron characterising cities, and therefore urban life. For example the modern boulevard, often miles long, seems boring even in the most beautiful surroundings, simply because it is unnatural.
In contemporary city planning Sitte states that there are three major methods. They are the gridiron system, the radial system, and the triangular system. Artistically speaking not one of them is of any interest, for in their veins pulses not a single drop of artistic blood. A network of streets always serves only the purposes of communication, never of art, while the demands of art do not necessarily run contrary to the dictates of modern living (traffic, hygiene, etc.).

Plazas in the modern system
What artistic value is there in an open plaza when it is congested with foliage? So, as one of the basic principles of design trees should not be an obstruction to the line of sight. Sitte criticized the modern public garden which was surrounded by open streets. It was exposed to wind and weather and was coated with street dust. Formerly there were private gardens that belonged to palaces and were secluded from traffic, and such gardens fulfilled their hygienic purpose despite their small size. Thus all these open modern parks failed completely in their hygienic purpose and the fundamental reason for this was the block system of planning.
The relationship between the built-up and open spaces is exactly reversed. Formerly the empty spaces (streets and plazas) had an entity and impact. In the contemporary planning process of laying out buildings the left-over irregular wedges of plots often become plazas!

Artistic limitation of modern city planning
Sitte’s analysis developed in response to the following contextual factors. Commercial activity had increasingly abandoned public open space. Public affairs were discussed in the daily paper instead of plaza. Economic growth led to the regular parcelling of lots based on purely economic consideration. Works of art were straying increasingly from streets and plazas into the art cages of the museums. And above all the enormous size to which the larger cities grew led to a consequent inflation in the size of streets and squares. 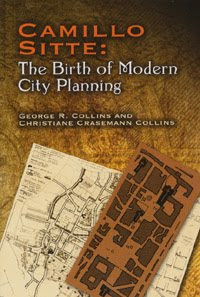