A symposium hosted by Manchester School of Architecture reflects upon urbanism and industry, writes Steve Parnell in The Architects' Journal 31 May 2012 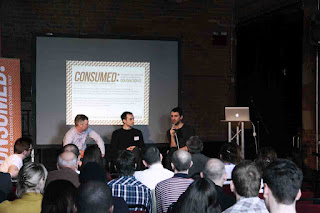 The fact that the students from Manchester School of Architecture’s MA in Architecture and Urbanism hosted their ‘Consumed’ symposium at the International Anthony Burgess Foundation, a converted mill that was once one of the largest producers in Manchester, remained unmentioned, although as Irena Bauman rightly noted, such a seminar would not have happened even five years ago. The shift from a production to consumption economy has long been acknowledged, but it’s only really during economic crises that we seriously consider how society is configured and the position of architects within it, lamenting the fact that we are tossed and turned on the waves of other people’s plans and profits.

Throughout the day, several themes emerged concerning a rethink of society’s configuration and, by implication, the architect’s role in it. As anticipated, sustainability underwrote much rhetoric, but a more surprising discursive trajectory was the idea of the city as the new sovereign entity, initially put forward by Joseph Grima, editor-in-chief of Domus. Rapid urbanisation, fuelled by addictions to oil and technological frisson, results in undesirable and invisible long-term side effects. Cities now exist far beyond their municipal boundaries. Besides the obvious environmental impact, the amount of land upon which they depend for food and energy around the world is enormous and unsustainable. Countries, cities and hedge funds are in the process of annexing previously undesirable tracts of land in far-off places for food security and even as a tradable commodity. As usual, Africa bears the brunt of this exploitation and is being rediscovered as the breadbasket of the world, debunking the age-old myth that it is unable to support its starving population. This land-grabbing formed the main thrust of Grima’s talk, but he also introduced economist William Jevons, who wrote in The Coal Question, ‘It is wholly a confusion of ideas to suppose that the economical use of fuel is equivalent to a diminished consumption. The very contrary is the truth.’ Written when Britain’s global dominance was predicated by the supply of coal, this truism seems as apt now, in the age of peak oil, as it did in the mid 19th century, and Grima supplied convincing evidence.

Berndt Jespersen and Mette Skovbjerg of Kalundborg Symbiosis in Denmark described their public/private initiative that started in the 1960s primarily out of an economic motivation. Using the outputs of one industrial process as the inputs of another is so blindingly obvious and joined-up that it could only happen in Scandinavia. The city of Kalundborg now has 14 companies recycling water, 12 recycling industrial by-products (aka ‘waste’) and seven recycling energy in one large symbiotic system that makes the city more competitive as a whole. This competitiveness of cities also formed the basis of Irena Bauman’s talk, in which she claimed that cities were now more powerful than nations. She echoed James Kunstler’s view that the 21st century should be about ‘staying in a place worth staying in’, as opposed to last century’s desire to move, and advocates architects (and developers) working in the area where they live. This is not only because of the reduced carbon footprint, but because they know the area and, fundamentally, can be held accountable for their work. Cities, in other words, should be long-term communities rather than short-term commodities.

On the other hand, Michael Pawlyn of Exploration Architecture still believes in that old-fashioned Buckminster-Fullerian notion that architects can solve the world’s problems technically and materially, if only someone would listen to them. The bio-mimicry he peddles is a 21st century High-Tech movement that applies natural systems to artificial problems. The loop may be cyclic, rather than linear and the energy solar, rather than carbon based, but the ambition is the same: ‘decide on the future we want, and then set about creating it.’ How exactly we do the hard bit – deciding on the future we want – was not elaborated upon.

Where Jespersen and Skovbjerg asked ‘Why should a tomato fly?’, and Grima questioned the sanity of constructing cities like Dubai, Pawlyn would jump at the challenge like an imitation grasshopper. Whereas Bauman was glad to see the back of the marriage between the egotistical client and egotistical architect, and Grima called for a ‘recalibration of expectations’, Pawlyn would ‘start with an ideal and compromise as little as possible.’ All would agree that architects have to regain the territory that an organisation like CIAM once owned, tailored for a post-consumed society. Whether this can be designed before the next boom arrives remains to be seen. One thing is certain: the design solution has to be part of a wider political solution and an architectural culture that only focuses on the former will remain at the behest of the latter. 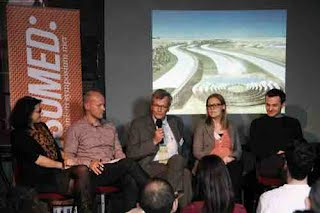 Posted by EAMONN CANNIFFE at 06:43