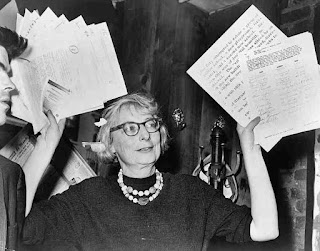 ‘The Death and Life of Great American Cities’ is the first of several books by writer and activist Jane Jacobs. Upon publication in 1961, the book received mixed reviews, many of which disregarded Jacobs’ ideas because of her lack of a professional architectural or planning qualification. Jacobs’s research was undertaken by analysing the districts and neighbourhoods first hand. Her home district Greenwich Village, New York is frequently referred throughout the book as it aided her ideas. Divided into four main parts, the book criticises the ideas of what cities should be like by ideologues, such as Le Corbusier and Ebenezer Howard to what they are in reality, complex organic systems.
Part One ‘The Peculiar Natures of Cities’ introduces the micro scale of Jacob’s ideas, ‘Sidewalk Safety and Contact’. The purpose of the sidewalk is not only to carry pedestrians to and from places, it is a public space in itself and for a district to be successful, pedestrians need to feel safe and secure on sidewalks with strangers. For this to happen sidewalks must have three main qualities; ‘Clear mark of private and public space; must be eyes on the street at all times and sidewalks must have users on it fairly continuously.’

Jacobs expresses the importance of local public characters in neighbourhoods, explaining that they strengthen the ‘eyes’ on the sidewalk and help form a social network, dispersing community news and connecting the local population. However, if there is a rapid change in population, the ‘eyes’ on the sidewalk are new, thus safety is jeopardised, particularly where children’s security is concerned.
Numerous issues with garden city planning are raised throughout the book. One in particular, which is the creation of child-rearing spaces at the centre of superblocks, where young children can be easily supervised. However, the design of such structures neglects the outer sidewalks as the ‘eyes’ are predominantly fixated on the interior spaces leading to a false sense of security. Jacobs describes parks as ‘volatile spaces’ and like sidewalks need ‘eyes’ and continuous usage but vast open spaces make this much more difficult to resolve. If a neighbourhood park fails to attract people, it must become a specialised park, incorporating special attractions to draw people into the space.

In Part Two ‘The Generators of City Diversity’, Jacobs discusses four conditions, which must be met in order to generate exuberant diversity. The need for primary uses, short blocks, aged buildings and sufficient concentration of people. Jacobs’s states that Primary uses i.e. work, education, museums, public buildings etc are buildings considered as anchors to a district; they attract people to a district and create secondary diversity, enterprises which thrive in response to the presence of primary uses. Each district should have at least one primary use to ensure enough activity within the district at different times.
Jacobs explains the need for aged buildings, as they ensure low rent yields, encouraging the growth of small enterprises. Furthermore, for a district to be diverse, it must incorporate a mixture of low, medium and high yield buildings. Large swatches of new construction are ineffective as only highly profitable organisations are able to afford the high overheads.

Small blocks, allow for a greater cross-use within a Neighbourhood or District as residents are able to explore streets which they would not have explored beforehand. This leads to more feasible spots for commerce due to the increased routes available for citizens.
The need for a relatively dense environment of between 100 to 200 dwellings per acre increases the number of users on the sidewalks and eyes on street. However, too dense a concentration leads to high rise housing, where sight lines are inadequate to keep the sidewalks safe and structures become standardised. On the other hand, low-density areas lead to stagnant ‘grey areas which are in danger of becoming slums.

Part Three. ‘Forces of Decline and Regeneration’ discusses the ideas on the tendency for great diversity to be self destructive where certain neighbourhoods or districts become so popular with one particular use that there is no diversity left due to the profitability of that use. Jacobs explains that problems are far more serious if this use is duplicated across districts.
Amongst other destructive natures of cities, Jacobs writes about border vacuums and the physical and functional effects they have on cities by creating boundaries, dead ends and splitting the city into small fragments. Using the West side of Central Park, New York, she states that the easiest of borders to correct are those that could encourage much greater use of their perimeters.
The ‘Urban Renewal’ slum clearance program in the late 1940’s and 1950’s was catastrophic; the programme devoured numerous neighbourhoods in an attempt to thwart slums. However, a slum cannot be replaced with high yield projects as this does not overcome problems which created the slum in the first place. Instead the slum is redistributed amongst other districts. Jacobs proposes that the key in un-slumming a slum is in stopping people leaving the slum too fast. If a sense of community is strong enough, residents will more likely stay and overtime develop their homes and neighbourhood.

In the chapter ‘Cataclysmic Money’, the author emphasises that money can only do harm when it destroys the four conditions for diversity. Jacobs explains that one of the most damaging ideas is Credit Blacklisting by lending institutions, which has severe implications on slums and their ability to un-slum as residents are unable to gain credit to start local enterprises or complete works on their homes.
The last part, ‘Different tactics’ attacks legislations within the planning department, especially low income housing schemes. The idea of separating people by income seems un-natural, generates a variety of problems, and creates issues with local enterprises as their clients may not be able to afford their products. Instead of low-income housing, Jacobs stipulates that the government should subsidise rent on private dwellings for low-income earners, thus dispersing the low-income population around the city.
Jacobs expresses her hatred for traffic arteries, parking lots, gas stations, automobiles and the toll they have on the city, particularly on the erosion of sidewalks. She acknowledges the need for cars but believes that there should be far less and those remaining should be made to work harder.

Finally, Jacobs concludes the book on the stance that cities are formed from organised complexities. These complexities are not simple but are intertwined with each other. Vertical structures oversimplify these complexities thus horizontal structures work better in city planning.
‘The Death and Life of Great American Cities’ is in no doubt, one of the most inspiring urban planning texts of the 20th century. The style of writing employed by Jacobs makes the book a pleasure to read and her love for cities shines through each page. The impact of Jane Jacobs and ‘The Death and Life of Great American Cities’ has been profound in the architectural and urban planning world as well as New York. In 2009 a block on Hudson Street, Greenwich Village was renamed ‘Jane Jacobs Way’ in honour of the writer who offered a different way of thinking about cities. 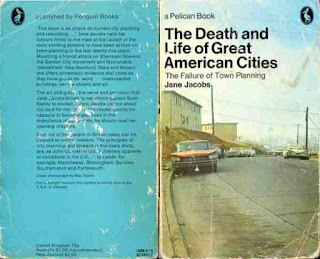 Posted by EAMONN CANNIFFE at 09:43