The book “The Charged Void: Urbanism” is the second volume to “The Charged Void: Architecture”,and the two publications comprise the complete works of Alison and Peter Smithson. This volume features a wide range of projects built and unbuilt, with architectural and urban designs organized in fourteen thematic chapters. Each of the projects are illustrated, assessed and given a commentary. The major works included in the book are he Team X Doorn Manifesto with its worked examples, the Closed Houses, Fold Houses and Terraced Crescent Houses; large scale urban projects such as Berlin Hauptstadt, Hamburg Stieilshoop and Kuwait Urban Form Study; projects for London with a triangulated net of road junctions and, of course, the most enduringly successful and conservative project The Economist Building; all projects illustrate their response to the urban fabric and specifics of each situation while exploring other themes.

Alison Smithson (1928-1993) and Peter Smithson (1923-2003) together formed an architectural partnership, and are often associated with the movement of the New Brutalism. Peter and Alison were also core members of Team X, a group of young architects who were challenging CIAM doctrinaire approach to urbanism. The first chapter of the book named “Cluster” introduces a search for identity in housing groups in London in the 1950. The proposed study shows that community should be built up of the cluster of involuntary/voluntary association of elements such as the house, the street, the district and the city.

The aim of Doorn Manifesto (1954) was to demonstrate that a specific form of habitat must be developed gradually for each particular situation. Patrick Geddes’ Valley section demonstrated the relationship of the communities to their habitat. It also makes clear that the same housing estates were to be found all over Britain regardless of the local climate, traditions or the nature of the place. There were various examples to help to demonstrate the proposed Manifesto.

A few chapters are dedicated to large-scale urban projects such as Berlin Hauptstadt with its’ concept of mobility and “streets in the sky” in which traffic and pedestrian circulation are rigorously separated. A similar theme appears in the Hamburg Steilshoop project: mobility, the inverted profile to the centre and urban form elements that can accept possible growth and change. The particular “pavilion-and-route” urban arrangement of the Economist Building (1959-64) originates from the Berlin Hauptstadt project. Similarities are seen in the organization of vehicular and pedestrian routes. Separate geometries at different levels form two overlaid nets. Without a doubt the Economist is the most successful of the Smithsons’ buildings.

Another urban study which I was particularly interested in was the Kuwait Urban Study and the Mat-building project. The idea of inter-visibility and interchangeability seem very straightforward and natural. The existing mosques in the old city of Kuwait were used as “fixes” within the new urban fabric overlaid with the mat-building. Series of identifying inter-visibility “galleria” (after the Galleria in Milan) were cut through the mat-building. The idea of the mat-building as an urban form moves away from the idea of individually designed building to one of repetition. The new urban form allows for pedestrian freedom of movement away from the sun and traffic noise. The Rampart Garages over the main road have several functions rather then just for car parking. The line of the garages defines the extent of the old city by spanning and shading the road as well as cutting down the area of naked road in the greenbelt that has replaced the old wall. This study can be taken as a new interpretation of the essence of an Arab City. 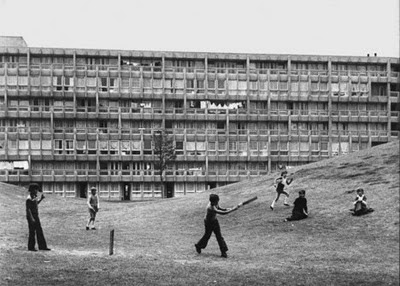 A chapter which I found rather interesting was about Holes in Cities. The Smithsons were very concerned with this problem and as response to it they developed their own attitude and proposal which can be followed in some of their works. Holes in cities are made by the abandoned sites, industrial dereliction, demolished historical centers and new connective systems that cut into the urban fabric. There can be few solutions or responses to the problem; holes in the city should be thought of as open connective spaces for the use of the citizens. The idea of “greening” speeding the work of nature can be a simple response to the problem of holes. The remaining historical monuments can be used as “markers” on which a new grain can be based and offered to the citizens. The much talked about Robin Hood Gardens project is brought up as an example in this chapter, the central green mound of which was planned as a “stress-free zone, an area of quietude”. The Smithsons’ hoped that designing a big green mound in a busy area of London would offer a remarkable experience for the residents.

An interesting thought on “poetry of movement and sense of connectivity” are presented in the works in a chapter named Cohesion. The Smithsons identified that cities were too dense and needed to be loosened up with public spaces expanded. The road is seen as a way of controlling intensity, which can help to loosen up the texture of the city. In the project The New Ways for London (1959) suggest that the motor ways, roads are routed to provide a series of recognizable anchors at the places where the relationship to the city structure can be observed. The system of “triangulated net” is a three-way junction motorway at two levels (high and low).

The Smithsons’ lifelong interest in climate response takes its place as an essential part of their overall view of architecture. Throughout their work we see extensive studies of sun angles, north points and environmental studies represented in the drawings of the projects such as the 1989 competition entry for the Bibliotheca Alexandrina in Cairo. The environmental analysis are translated into form and detail with clarity and elegance.

The book is beautifully produced and illustrated, with images that range from simple sketches and working details to photomontage and photographs of models. There are many touches of gentle humor in the authors' comments. This volume makes a significant contribution to the understanding and improving needs of people, the environment and its response to historical, traditional and physical constraints. 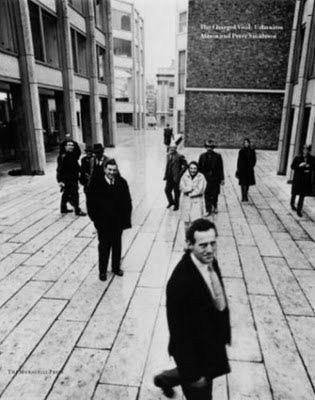 Posted by EAMONN CANNIFFE at 11:02