“Town Planning in Practice”, a compendium of images and theories on Garden City design, followed on from the work of Camillo Sitte in Germany and is influenced by William Morris and Socialist ideas from Ebenezer Howard. In Howard’s book “To-morrow” 1898, he discusses how landowners’ desire to raise values of land resulting in overcrowding, overbuilding and inadequate town planning lead to concerns and Howard suggested an experiment where a town is planned on the opposite ideals. This plan, attracted reformers like Unwin and resulted in the Garden City Association being formed. Unwin, worked with his brother-in-law, Barry Parker and together they formed “First Garden City Ltd” in 1903; together they were appointed architects, of 16 km² of land outside Hitchin, purchased for building a new garden suburb, Letchworth Garden City. In keeping with the ideals only one tree was felled during the entire initial construction phase of the town, and an area devoted to agriculture surrounding the town was included in the plan - the first "Green belt". Innovation was seen within the planning with the first roundabout dating from 1909.
In 1909, five years after the Garden city at Letchworth was completed, Unwin wrote his book of guidance, “Town Planning in Practice”. He wrote as an influential planner, whose ideas and ideals were praised for more than three decades. Unwin is one of the greatest figures of the Garden City movement, which has had a tremendous impact on planning in both Europe and the United States and more recently within Australia. “Town Planning in Practice” has been regarded as the bible of neo-traditionalist planners. The book looks to the past for inspiration for the future, considering what evidence is apparent and discusses successes. The book is significant for today’s planners, with its reflections on the past and its insightful analyses of many towns within Europe and the United States, accompanied by photographs, plans, drawings and maps.

The Role of a town planner, according to Unwin

The book has 12 chapters, 8 of these refer to the practical issues of planning an urban area, not just the experiences of Letchworth, as many of the essential issues of planning an urban area are addressed. The city survey is an interesting chapter and dictates not how the survey should be completed, this direction has been left with Professor Geddes, who we are told has published some “helpful and stimulating essays on this subject”. Geddes is said to give a more complete treatment on the subject, though Unwin does recognise the importance of the survey. What Unwin does impress in the chapter is the job of a town planner.
“He should remember that it is his function to find artistic expression for the requirements and tendencies for the town, not to impose upon it a preconceived idea of his own…. He will, no doubt, have very definite ideas and preferences, and will express the requirements in the terms of that form which most appeals to him; … he has no need to go beyond that, no right to usurp the functions of a dictator decreeing what shall be expressed.” 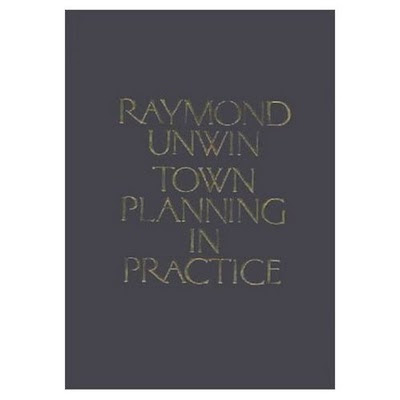 The book has been written for planning scholars and Unwin states the town planner’s duty is to study the town, his people and their requirements, this will enable a place to be serviceable and importantly allow the community to express their needs. Planners are told to mix the artistic expression with the practical needs of the area to be planned. Descriptions of the extensive surveys to be carried out are described within the book. Unwin states that the planner must interpret these results, with his experience and technical skill and thoroughly study the site. The designer will need to be a visionary, giving thought to the location of transport networks, central sites, buildings of importance and drainage amongst many other necessary considerations. I personally believe that Unwin approaches the challenge of the built environment with rational thought and considered essential measures, but within planning policies as we have come to accept today we are often limited and constrained with artistic abilities and financial constraints.

Unwin dedicates 2 chapters to these 3 different topics, looking frequently to the past for inspiration and direction in his own thought process. Throughout the book there is a deep appreciation for the beauty of medieval cities, with their walled towns often described as a “picturesque effect” but also recognising their practicalities of defence. Unwin appreciated the need to limit the growth of modern towns but not essentially with walls as the limiting factor. What is important is the distinction between new areas and suburbs, towns and country. Unwin, I believe has a stoke of genius here,
“There can, however, be little doubt that it is possible to set a limit to the size to which a town shall extend continuously without some break, some intervening belt of park or agricultural land; and this at least it is most desirable to secure.”
Here the concept of Green Belt is introduced, with the intention of fostering a feeling of local unity for the community and a secure green space for wildlife and extensive leisure activities. Unwin has the passion of an artist and has the mind of a sociologist, with the desire to ensure land values are not the priority, but rather society and environmental issues.

The Relevance of this Book

Thanks to the New Urbanists, “Town planning in Practice” was brought back into circulation in the 1980s. Unwin, I believe, tries to deliver his own utopia, through his plans for developing a garden, “green”, city. A worthy read for students of any urban design discipline, as it contains excellent theories, worthwhile considerations of community needs and wonderful historical contents. However, the book does have constraints as not all road arrangements discussed transfer to the current urban road systems. Also, Unwin’s preference for optimum units of 12 per 20 acre for residential areas can be regarded as out-dated and restrictive as we are frequently accepting of apartment style living within multi-storey new builds and converted historical buildings.
Unwin’s social experiment in Letchworth has been a successful, inhabited development which is continually evolving. In 2007 architectural writer and broadcaster Jonathan Meades devoted a television programme to Letchworth. In "Heaven: Folkwoven in England" Meades suggested that many of the main features of British urban design in the twentieth century owed their origins to Letchworth Garden City - "a social experiment on a par with the Welfare State, a social experiment that affected us all and still does."

Unwin’s book further encourages planners to be individualistic with the artistic intentions, prioritising aesthetic diversity, drawing on an area’s local strengths, giving sites strong landmarks and encouraging design principles, warning against haphazard design and makes a strong case for rational planning and zoning. Unwin’s work has influenced the design of many towns and suburbs, including Wythenshawe, Hellerau, and Canberra, and continues to have a positive effect on the planning system of the future.

Posted by EAMONN CANNIFFE at 09:08