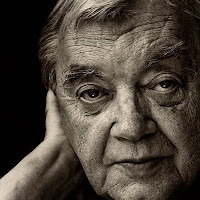 a critique by Ed Cutler


‘Collage City’ presents a critical analysis of the origins, ideologies and shortcomings of Modernist city planning through studies of the attempts of Modernism’s opponents to solve the resultant issues through their antithetical proposals. The messianic Modernist movement had striven to start afresh and build the new Utopian city. However, Rowe and Koetter argue that a “retarded conception of science and … reluctant recognition of poetics”1 led to the failure of these urban design proposals. In a Post-Modern reaction to this ‘total-design’ approach, the authors propose that urban design must be considered through fragmentation, ‘bricolage’ and metamorphoses of interpretation to produce a functioning network of pocket utopias.


Following the introduction, the book is split into 5 chapters – Utopia: Decline and Fall?; After the Millennium; Crisis of the Object: Predicament of Texture; Collision City and the Politics of ‘Bricolage’; and Collage city and the Reconquest of Time. They conclude with an Excursus of “possible objet trouvés [to be used] in the urbanistic collage.”2


‘Utopia: Decline and Fall?’, after a quick mention of modernism and a few of its protagonists, introduces the history of Utopian visions with a brief explanation of the ascetic, Christian values of the Classical Utopia, and the transformative Platonic Utopia founded more in activism than the ephemeral. Flying through history and notable examples of ideal city designs, the authors eventually land back in the early 20th Century, in the Ville Radieuse. The chapter illustratively demonstrates the ambiguities and contradictions of Modernist urban planners and discusses why their visions were so highly influential but doomed. 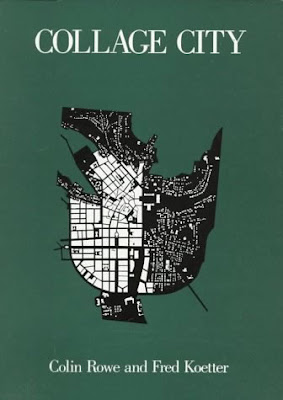 After the confusing journey through Utopias, ‘After the Millennium’ starts to clear up what issues the authors would actually like to deal with. With fewer citations and name-drops than the previous chapter, this chapter is a discussion of the first major reactions to Modernism after its stagnation through the ‘40s and ‘50s. Through comparisons of Disney World and the work of Superstudio, they look at the 2 extremes seen in the contemporaneous critique of the Ville Radieuse. The hyper-rationality of Superstudios egalitarian utopias and the picturesque artifice of Disney World both find themselves so extreme that their theories do not make their way into reality outside of the photomontage or theme park. The authors ask “why should we be obliged to prefer a nostalgia for the future to that for the past?...Could not this ideal city…behave, quite explicitly, as both a theatre of prophecy and a theatre of memory?” – a theme revisited in later chapters.


‘Crisis of the Object: Predicament of Texture’ finds its way back from the fantasy world and into the realised city. Public space (and its appropriation) and the texture of the urban fabric are the main themes explored through this chapter. Dismissing the ‘continuous void’ of the Modernist tendency to place “towers in parks” (à la Le Corbusier’s Plan Voisin) the authors suggest that the ‘mystery of what is beyond’ brings more life to the city. “Speculative pleasure” of the city walker creating his own narrative to spaces that are inaccessible to him allows for a more connected experience to be had, rather than allowing free reign to meander across every open space in the city. However, the Modernist view of buildings as objects is not disregarded in its totality. Their proposal suggests that buildings should act both as space occupier and space definer – maintaining an individual presence whilst providing continuity to the urban texture. 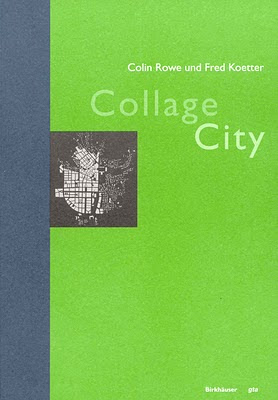 Further compromise is found through ‘Collision City and the Politics of “Bricolage”’ where the authors turn their discussion towards those who design and create the spaces rather than the spaces themselves. As discussed in earlier chapters, Utopian ideals have always relied on an engineered ‘total design’ or ‘total architecture’ in order to realise their prescriptions, but this monistic reactionary approach to problems causes only more problems due to its reliance on data which can quickly become obsolete. Adversely, the ad-hoc nature of Levi-Strauss’ ‘bricoleur’ – piecing together instant solutions from a limited palette of tools – does not achieve workable results either, with solutions acting for the present and not necessarily continuing, with much effect, further into the future. Rowe and Koetter suggest (again) that architects and urban designers should aim for a middle ground, somewhere between the scientific engineering and the ad-hoc bricolage, to produce solutions which can be both contemporary, efficient, but flexible enough to move with the times and adapt to future situations.


‘Collage City and the Reconquest of Time’ sees the authors drawing together the fragments of argument presented in the preceding chapters to form a conclusive proposal to apply to future urban designs. The outcome: a proposal of Collage City – a city of fragments from the past, present and future, taking inspiration from working examples in existing cities; some scientific, others picturesque; some antique, others contemporary; some may be rational, whilst others disordered. Collage city would offer the poetics of Utopia, but the juxtaposition and layering of smaller designs into a whole (rather than a totalitarian, fresh slate approach) would allow for the city to be free of the unchangeable finality of Utopian politic. A post-modern composition – lacking prescription – of remembrances, shifted contexts, recycled meanings, metamorphoses… allowing the city to create itself, to read itself and to form its own meanings from borrowed fragments


As an example of what some of these fragments may be, existing and historic urban objets trouvés are presented to the reader in ‘Excurses’ – an appendix of urban objects to be implemented into the urban collages (hopefully) designed by their audience. Memorable streets, Stabilizers, Potentially Interminable Set Pieces, Splendid Public Terraces, Ambiguous and Composite Buildings, Nostalgia Producing Instruments, Gardens – all utilised correctly and in moderation, can go towards an effective application of the Collage City proposal. Some may argue that many contemporary cities, due to the nature of their development over time are already collages of historic fragments and epochs. But the nature of Collage City is that the fragments are applied strategically and affably so as to allow the city to develop and nurture itself, free from prescription which may still linger in cities already containing said fragments.


The final paragraph reads: “Utopia as metaphor and Collage City as prescription… the disintegration of modern architecture seems to call for such a strategy…; and, possibly, even common sense concurs.” And, I think that, although their argument at times can be hard to follow through the ambiguity of the paragraph length sentences, common sense does prevail through the proposal of Collage City.

Posted by EAMONN CANNIFFE at 02:17