The Structure of Urban Artifacts
Urban Artifacts are unique places of the City and withstand the passage of time; they are characterized by their own form and history. Urban Artifacts can have different functions overtime which are independent of their form and they can shape the City. An example which is given by Rossi, is Palazzo della Ragione in Padua. The Palazzo as Rossi states, forms the City, its function varied throughout the years, and it has historical value. The uniqueness of Urban Artifacts depend on their form, which is affected by time and space and by being considered as a work of art, because they are related to space, events and the form of the City.
In order to criticize naive functionalism which addresses typologies in relation to function, Rossi emphasizes typological questions. Functionalism considers an artifacts’ function to be static, but Rossi argues that this classification causes problems to the City. He supports his idea through his argument that Urban Artifacts change depending on time and needs. Rossi considers type as a logical principle, which constitutes the form and the permanence of an object. Moreover, he believes that function can be articulated into form, and form has the possibility to exist as an Urban Artifact, so form can be articulated as an Urban Element. The form can persist through transformation and become an Urban Artifact par excellence.
Although Urban Artifacts are complex, some features to understand them are: their permanence beyond function, their nature is like a work of art and also they have a collective character. Rossi describes the City as a totality, as a result of its collective character. Concerning the Urban Artifact in its totality, this gives us a complete picture of the City.

Monuments and the Theory of Permanence
Permanence is mentioned by Rossi based on Poete’s theory about persistence that says that monuments are the physical signs of the past. Rossi conceptualises permanence as having two sections. The first one are the propelling elements which have different functions overtime but still condition the urban space, for instance Palazzo della Ragione in Padua. The second section are the pathological elements, which are artifacts not in use and are isolated in the City; an example is the Alhambra in Granada. Persistence can transform an artifact into a monument, and a monument takes part in urban development.
‘A monuments persistence or permanence is a result of its capacity to constitute the city, its history and art, its being and memory. ‘
Rossi considers that the qualities of the parts of the City have sociological, formal and spatial characteristics that are cultivated through time and space. He opposed the Modernist idea of zoning based on function. Rossi believes that you can understand a part of the City from different aspects such as physiological, historical, geographical aspects. In this case Rossi uses the dwelling area as a study area in order to emphasise his side of the arguement. A study area can be the area of an Urban Artifact, it belongs to urban context and is a constituent part which is useful to analyze the City.

Primary Elements
A residential district is a part of the City’s form and it has a close relationship to Urban structure; for example Berlin’s dwelling area division affected Urban structure. It reflects peoples’ lifestyle and problems of the City and it needs long periods of time to get altered. Residential district can be considered as Primary Elements.
Rossi introduced the concept of Primary Elements which are elements capable of accelerating the process of urbanization in the city in a permanent way and also constitute physical structures of the city along with area. They permanently take part in a City’s revolution, being ‘nuclei of aggregation’. They can be considered as fixed points in the City. An example of a Primary Element is the Amphitheatre in Nimes, which became a small city. Other examples are the Pantheon and the Roman Forum which are transformed overtime.

The concept of Locus
Rossi also introduced the concept of Locus, which is the relationship between a location and the buildings that are situated there. Locus gives singularity to an Urban Artifact and it can be identified by a particular event that happened there. The Roman Forum, for instance, had some primary characteristics which were shaped by topographic conditions that were persisting through transformations. Through permanence the Roman Forum can be considered as a great Urban Artifact and as a monument that shows the history of the City. Based on Cataneo’s theory that the City forms an indivisible body with its region, Rossi mentions history as the formation of Urban Artifacts, and that history is the collective imagination and continuity of urban structure and as a result he conceptualises the City as a collective memory.
Following the above, Rossi talks about Athens and argues that it not only relates to myth but also to politics and administration. Athens was considered as the first example of an Urban Artifact where the development of thought and imagination became history. During Athens's evolution its Primary Elements were variously located within the residential district.

The Evolution of Urban Artifacts
In the last part of the book Rossi focuses on the evolution of the City and the forces, mainly political and economic, that influence this process. Based on Halbwachs's thesis, he describes expropriation. Halbwachs classifies expropriation in two parts. The first part he relates to individuals and in the second part he relates expropriation with Urban Artifacts.
Rossi also mentions Bernoulli’s studies on urban development. Bernoulli was against private land ownership, and he believed that the communal should belong to the collective. However, Rossi argues and supports that expropriation and land subdivision were necessary for the evolution of the City.
The Industrial revolution transformed the City. However, the scale of the transformation modifies an Urban Artifact but does not erode its quality. In addition Primary Elements were created from this transformation, for example the Adelphi residential district by the Adams Brothers which were designed based on a sketch by Leonardo Da Vinci.
At the end of the book Rossi mentions that a City can choose its image by choosing a political institution. Citizens can choose the political institution which controls the City’s transformation. Some examples of Urban Artifacts that present political ideas are Athens, Rome, Paris etc.

Peter Eisenman on ‘The Architecture of the City’
Eisenman believes that Rossi sees the Architect as the Subject that studies the City and the City is the Object of the study. By using a humanist conception, Rossi integrates the Subject into the Object as a way to oppose the practice of Modernism that separates the Subject and the Object.
According to Eisenman, Aldo Rossi reintroduces the elements of history and typology. History as a collective Artifact allows us to understand Rossi’s metaphor of the City as a giant man-made object, through the process of production and time. Time is in Rossi’s concept of Permanence; based on that concept he presents housing and monuments as Primary Elements and states that monuments can accelerate or retard city growth.
Eisenman discusses Rossi’s concept of Locus as an individual Artifact. Similar to permanence Locus is determined by space, time, event, topography, and form. A locus constitutes an event itself, a 'locus souls'. Furthermore, he argues that Rossi considers history as a form that relates to its original function, but only the form remains vital and history becomes memory. Time is a collective memory and type becomes an analytical material of history. Rossi discovers in typology the possibility of invention, because type is both a process and an object.
Eisenman criticized Rossi for two reasons: the first one because he sees the City as a man-made object separated from man, like Modernist architects did. The second reason is although Rossi seems to believe that individuals cannot influence history, he sees the city as human achievement par excellence which opposes this view.

Conclusion
In conclusion, Rossi used historical methods to oppose the Modernism’s concept of the City. He assumes the City to be architecture which is a construction over time. He also mentions the multiple forces within the Urban Artifacts in the City. As Rossi said

‘This book is a corner stone of urban studies rather than the perfect theory and it will be gradually completed by supplements of new considerations related to the city.’ 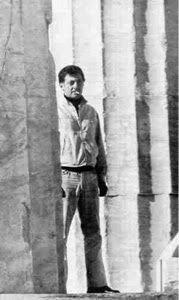 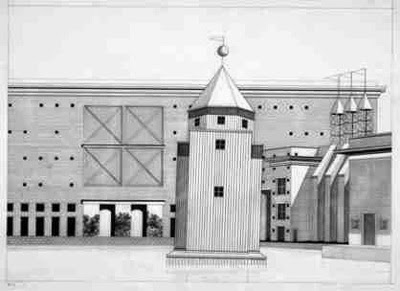 Posted by EAMONN CANNIFFE at 06:07