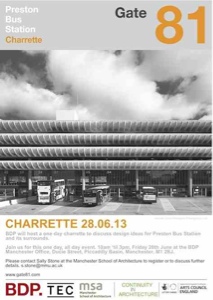 In December 2012 Preston City Council voted ‘in principle’ to demolish Preston Bus Station and replace it with a surface car park. This building is a major cultural landmark and it should be preserved and creatively adapted to serve the city. It could act as a key building and public space to make Preston accessible and temper the decay that is affecting the city. BDP will host a charrette on Friday 28th June 2013, at their North West office to discuss ideas for the future of this building and the urban area surrounding it. The charrette or workshop will be held in BDP’s Manchester offices in Piccadilly Basin. Key members of their architectural and urban design team will contribute to the discussion. They feel that this is a very important project, both locally and nationally. The state of panic that now exists in Preston is symptomatic of the reaction not only to the recession, which has hit the North particularly hard, but also to the change in shopping habits that the digital revolution has caused. How the post-industrial city will have to adapt to an uncertain future is one of the most pressing issues for architects and designers at this point in the twenty-first century. Preston Bus Station was constructed in 1969, and was designed by BDP. It was built at a time of great confidence; it was, after all, the same year as the first Moon landing. The building resembled an airport lounge, testament to the importance that was placed upon it by the people of Preston. Modernist buildings can possess great quality and worth, and can contribute to the collective memory of a place. If we are not careful, we will regret the loss of many of them, just as we regret the loss of many older structures that were torn down in the name of progress. Certainly the Bus Station is very much a symbol of Preston, if it is lost the city will lose a famous landmark and part of its optimistic heritage. This charrette is open to all, architects, designers, and students as well as anyone else who is interested in the future of the building. Contact Sally Stone for more details or to discuss this further: s.stone@mmu.ac.uk. Gate 81 is a project that intends to bring to greater attention the plight of Preston Bus Station. There has been a considerable amount of negativity surrounding the future of the building, and this is our attempt to bring some optimism to the situation. To this end, we are staging a series of events to both raise the profile of the building, and to generate ideas for the future of this troubled building and the urban area that surrounds it. The first, which was held on May 11th, was an open workshop, collection of lectures and other happenings that was held on the concourse of the Bus Station. Gate 81 is supported by: The Arts Council, Manchester School of Architecture, They Eat Culture. www.gate81.com
Posted by EAMONN CANNIFFE at 10:54