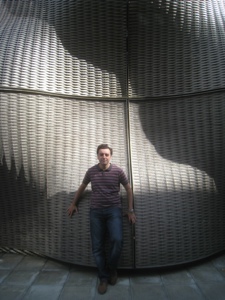 Nima's research subject is Re-interpreting sustainable design in traditional Iranian cities and he writes   Traditions of vernacular architecture have developed over millennia in response to the Iranian plateau’s arid climate, scarcity of building material, and extremes of temperature. In contrast to modern Iranian cities, which are simply copies of the contemporary European and American cities, the traditional urban texture is dense and very compact, combining diverse land uses with tight relationships among its buildings. The study aims to investigate the spatial patterns and urban morphology of traditional Iranian cities in order to identify the historic knowledge and techniques behind energy-efficient buildings and the successful built environment of traditional cities and will subsequently analyse the potential use of this knowledge in contemporary architecture and urban design. Nima was featured in this short film here and is shown at graduation here
Posted by EAMONN CANNIFFE at 01:07