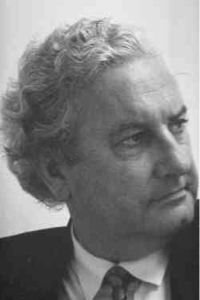 Introduction Robert Krier was born in 1938 in Grevenmacher. He is the older brother of fellow architect Leon Krier. He published Stadtraum in Theorie und Praxis in 1975. This book is a contribution to the establishment of an integrative typology of urban spaces, and let him to earn an influential position in urban rationalist polemics. His rationalism is based on the visual hierarchies proposed by Camillo Sitte and related to buildings of human scale. He considered that people have lost the sight of traditional understanding of urban space in the modern city. The major reason is that the citizens are aware of their environment and sensitive enough to compare the town planning achievements of the present and the past. They have the strength of character to pronounce sentence on the way things have gone. In this context, Robert Krier tries to explain the concept of ‘Space’ and how the traditional understanding of urban space may be reintroduced within the modern cities. In discussing the concept and the definition of ‘Urban space’, Rob Krier wished to clarify without imposing aesthetic criteria. He mentioned some types of space which exist between buildings in towns and other localities as urban space to discuss the function of the town planning. The polarity of internal and external space is constantly in evidence in this chapter. The laws of each are very similar not only in the form but also in the function. The internal space is an effective symbol of privacy which is covered from weather and environment. The external space is seen as open, unobstructed space for movement in the open air, with public, semi-public and private zones. The classification of urban space could be the suggestion to the town planner,that the two basic forms which constitute urban space are the street and the square. The geometrical characteristics of both spatial forms are the same such as the corridor and the room of ‘internal space’. The difference between them are the dimensions of the walls which bound them and by the patterns of function and circulation. 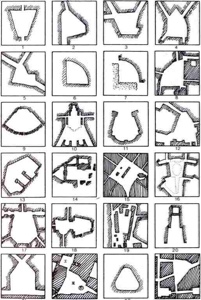 The square is produced by the grouping of houses around an open space. Rob Krier believed that the square was the first way for man of using urban space. This kind of arrangement supplies a high degree of control of the inner space. The street is a product of the spread of settlement once houses have been built on all available space around its central square. It has a more pronouncedly functional character than the square, which by virtue of its size is a more attractive place to pass the time than the street, in whose confines one is involuntarily caught up in the bustle of traffic. The street is unsuitable for the flow of motorised traffic, whilst remaining appropriate to human circulation and activity. The number and speed of cars remains a source of anxiety. The separation of pedestrians and traffic carries with it the danger of the isolation of the pedestrian zone. Solutions must be carefully worked out which will keep the irritation of traffic noise and exhaust fumes away from the pedestrian, without completely distancing one zone from the other. In formulating a typology of urban space, spatial forms and their derivatives may be divided into three main groups, according to the geometrical pattern of their ground plan. These groups derive from the square, the circle or the triangle. The three basic shapes are affected by the following modulating factors: angling; segmentation; addition; merging, overlapping or amalgamation of elements; and distortion. These modulating factors can produce geometrically regular or irregular results on all spatial types. At the same time, the large number of possible building sections influences the quality of the space at all these stages of modulation. All sections are fundamentally applicable to these spatial forms. The terms ‘closed’ and ‘open’ may be applied to all spatial forms described up to now. The spaces are the concept which is completely or partially surrounded by buildings. In discussing the erosion of urban space in twenty century town planning, Rob Krier said that the erosion of urban space is an on-going process which has been with us for the last fifty years in the guise of technological progress serving a democratic society. For instance, after the French Revolution, the development of new military technology and new tactical patterns for warfare ushered in an era. The defensive systems of towns were no longer offered adequate protection against the new weapon. City walls were demolished because the walls were no longer useful to the town. The decline of the city wall coincided with the start of industrial development, which forced cities into unprecedented growth. The influence of industrial building had a catastrophic effect on urban planning. The appearance of the buildings’ architectural style and design seemed to be of no consequence. Inhuman conditions were imposed on the worker and this process of town planning was destructive. Any planning innovation in a city must be governed by the logic of the whole and in design terms must offer a formal response to pre-existing spatial conditions. Without a doubt, contemporary town planning with its total disregard for spatial problems is a more attractive proposition in the current sociopolitical climate. It is no coincidence that priority is given to traffic and the other trappings of technology, rather than to people's need for a tolerable urban environment. As Rob Krier said “As long as man needs two arms and two legs, the scale of his body must be the measure of size for all building.” 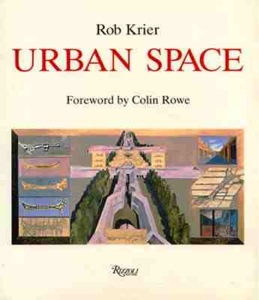 Posted by EAMONN CANNIFFE at 08:42