The World Has Been Empty Since The Romans: Architecture + Urbanism recommends 'Ian Hamilton Finlay'

Ian Hamilton Finlay (1925-2006) was one of the most original artists of the twentieth century. Early in his career he was Britain’s foremost concrete poet and his approach to his work – whatever material he used, whether wood, stone, neon, bronze or paper – remained that of a poet giving form to ideas. This display at Tate Britain focuses on Ian Hamilton Finlay’s recourse to a neo-classical idiom and his creation of sculptures that, by their conjunction of word and image, play with an emblematic use of reference and metaphor whose adopted form is most often that of the idyll. Until 17 February 2013 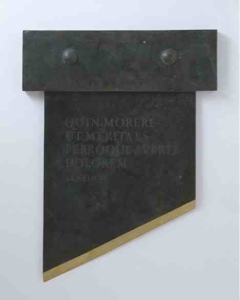 Posted by EAMONN CANNIFFE at 12:26