Raymond Unwin's pioneering book in a précis by Ahlam Sharif 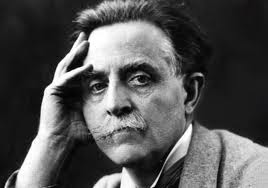 Sir Raymond Unwin lived between 1863 and 1940. He worked with his brother-in-law, Barry Parker and together they formed “First Garden City Ltd” in 1903, after which they were appointed architects of 16 km² of land outside Hitchin, purchased for designing a new garden suburb, Letchworth Garden City. Unwin was then asked to design Hampstead Garden Suburb in 1905, where he utilized the planning principles used at Letchworth. In 1906, he moved from Letchworth and resided in Hampstead and in 1909, five years after the Garden city at Letchworth was completed, he wrote his book of guidance, “Town Planning in Practice”.

Unwin started his book by mentioning the problem of the nineteenth century in England, which witnessed an exceedingly rapid growth, not allowing much time for town planning. This was accompanied by the decision on land usage being made by individuals on economic bases. The result of that was the extensive need for town planning. Although Building bye-laws laid a good foundation for healthy conditions of living, they lacked certain amenities such as art and beauty. It is important to attach art and beauty to town planning, which are expressions of community needs, life and aspirations. Studying old towns is useful for town planning because they provide good examples for works which were well done and visually successful. This study might help us to judge but not to copy what is likely to lead to the best outcomes.
Unwin mentioned individuality as a quality that characterizes and distinguishes each town from the other and provided examples of historic and even prehistoric cities to prove the existence and development of town planning throughout history.

After the nineteenth century, two schools of town planning were developed; the regular or the formal type and the irregular or the informal one, each side having its characteristics and arguments. Both of them had some results of marked beauty that highlighted the necessity of rethinking a combination and balance between them to work in a spirit of appreciation of the informal nature as well as the beauty of the formal human design. Unwin argued that in town planning, the planner needs to understand the beauty of old cities but also the changing conditions of today to ensure his or her design is realistic. They should also consider the requirements of the inhabitants and the circumstances of the site.

As the designer is responsible to find artistic and practical expressions for the requirements and tendencies of the town, without imposing a preconceived idea of his own, a survey is needed to collect and analyze as much information as possible that helps him/ her to have an image in mind of the town before being drawn on paper. This includes the collection of information from different parties, the interpretation of such information and the visualization of the site.


Unwin then discussed the main elements that shape the largely conceived framework of a town which he preferred to be of a size that introduces a sense of scale and proportion in relation with other parts. Those elements include the boundaries and approaches, the centers and the main roads. In order to study each element, he returned to the old towns as good examples that lead us to think of the importance and beauty of such elements, not by copying them but by using their ideas in modern shapes and requirements.
He discussed the main roads as highways for traffic and sites for buildings and emphasized considering them in relation to both these functions and in order of their relative importance. In his point of view, while the curved road is less monotonous and provides ever-changing direction and views, the straight road - besides being more comfortable for traffic - still has the ability to be beautified by either letting it lead to an important element or beautifying its sides by trees or by breaking the lines. Trees and grass can form natural decorations for streets and places forming avenues and adding further elements of beauty. While considering road treatments, street junctions are of extreme importance, as upon them much of the effect of the town depends. This entails trying to secure a terminal to the street picture, enclosure, easy line to traffic and maybe an open view from the building down the road.
After studying town planning, which focused on the general convenience of the town and the arrangement of the main roads, Unwin moved to study site planning as a smaller scale that considers the arrangement of buildings and the development of the site, and within that Unwin mentioned the relation with town planning and emphasized the required alignment between both. He also mentioned most of the treatments, which he applied earlier to town planning, as they were applicable to site planning. 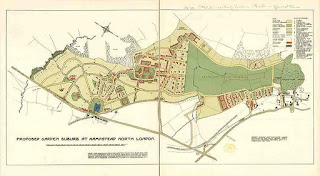 In site planning, the residential roads, plots and the placing of buildings are of importance where Unwin provided different treatments and details, which mostly were applied in Letchworth Garden City and Hampstead Garden Suburb. His aim was to show how to beautify sites while providing the practical best advantage for inhabitants’ requirements, the local conditions of the site and the collective needs. He provided multiple examples of how to provide a variety of treatments for the street junction and residential building groups around green areas and subsidiary roads; among those treatments he emphasized the necessity of securing a combination and a balance between a sense of enclosure and an extended outlook.
Unwin then moved on to discuss the difference between suburbs in the past and his current time with regards to variety and homogeneity. In his view, earlier suburbs had more homogeneity in material amongst their buildings mixed with a variety in colors that made them distinct. This was later disrupted by the use of cheap rail transport that mixed different building material brought from outside the suburbs.
Setting out from the notion that city identity reflects its people, Unwin believed that the architect needed to plan the site based on the needs and requirements of its residents and by creating relations between groups of buildings. He argued that better development of sites would be done if they were owned by smaller bodies (neither the government nor individuals), as they will focus on building communities rather than focus on the economic aspects of planning.
Unwin concluded by discussing the building bye-laws in England, where he saw that some of such bye-laws were arbitrarily developed and resulted in what he called “bye-law architecture”, which was distorted in form. In his view, to develop realistic building bye-laws, they need to be discussed with a number of concerned parties before they are finalized.
Posted by EAMONN CANNIFFE at 02:19