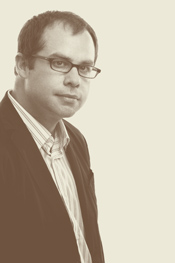 During the final decade of the period of massive postwar transformation known as the trente glorieuses, an imaginary city appeared in the writings and designs of a number of French theorists, architects, and artists. In a series of critical texts, architectural drawings, models, and works of art, visions of a “spatial” city of the future emerged: “a luminous city that was to float above the ground, all of its parts (and inhabitants) circulating in a smooth, synchronous rhythm” (p. 3).
In this study, art historian Larry Busbea excavates the urban utopianism of the 1960s in France, examining its aesthetic and ideological significance and reading its prospective imaginary “more as a symptom of its historical moment than as the revolutionary force it considered itself” (p. 7).
Immigration into cities caused immediate, cheap, downgraded, squarish ensembles, fast projects and building culture. Cities required reconstruction - there was an abundance of state architectural commissions - great opportunities for architects to develop vast and new territories. Spatial urbanism emerged within the context of a crisis of modernism in France and an era of unprecedented linkages between the public (state), the private, and the avant-garde in terms of architecture and planning.
The “spatial culture” of the 1960s in France was shaped by the tremendous economic expansion and technological innovation of the postwar period. Cultural theorists and architects in France responded to these changes with projects and images of a new urban society. The social and cultural environments they perceived and imagined were spaces of movement and energy in which the relationships between nature, technology, and humanity would be redefined. Artists were convinced that radical urban infrastructure change would be needed to cope with the post-war population boom and the onset of a full-blown consumer society.
The spatial city proposed an urban “megastructure” (housing, industry, agriculture, cultural units) suspended above the ground, and displayed an interest in achieving a synthesis or integration of the arts (bringing together architecture and painting or sculpture, for example), an emphasis on movement and mobility, a faith in technology and its possibilities, and a responsiveness to the new society of leisure combined with a suspicion of mass culture. Its most famous spatialist was Yona Friedman, the Hungarian born French architect, urban planner and designer.

His space frame/city/agglomeration:
-holds several layers
-horizontal and vertical movement
• -50-60% of structure occupied my modules (25-30 sq.m.) can provide air and light circulation for lower level
• -prefabricated modules for modular voids
• -mobility and adaptation: multiple and changeable configurations for social needs.
• -accomodates increasing population, provides second layer for urban pedestrian flow, preserves heritage in lower level
• -architect acts as a from giver (a similarity to situationism)
• -ground occupying foundation is outdated
• -space as structured substance, technical formulation of ideal infrastructure.
The proposal may span over
• -certain unavailable sites,
• -areas where building is not possible or permitted (expanses of water, marshland),
• -areas that have already been built upon (an existing city),
• -farmland.
In 1958, Yona Friedman published his first manifesto : "Mobile architecture". It described a new kind of mobility not of the buildings, but for the inhabitants, who are given a new freedom.
Mobile architecture embodies an architecture available for a "mobile society". To deal with it, the classical architect invented "the Average Man". The projects of architects in the 1950s were undertaken, according to Friedman, to meet the needs of this make-believe entity, and not as an attempt to meet the needs of the actual members of this mobile society. The spatial city, which is a materialization of this theory, makes it possible for everyone to develop his or her own hypothesis. This is why, in the mobile city, buildings should :
1. touch the ground over a minimum area
2. be capable of being dismantled and moved
3. and be alterable as required by the individual occupant.

Friedman was a GIAP member and founder of GEAM (Groupe d'études de architecture mobile). In 1964 he designed his most developed scheme for Spatial Paris: a project for structure suspended above the Gare Saint-Lazare train station and branching over it’s tracks. In 1970 he developed the text for Spatial Paris which showed the city as a machine, flat-gridded, with directional arrows indicating the area and circulation relationship proposed by transformation of the Metro and roadways. 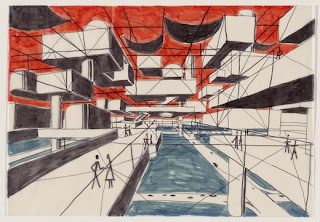 Paul Maymont, also a member of GIAP, developed a more systematic approach to megastructures. His most famous projects were Spatial Paris and Paris under Seine. He started his career with Tokyo Bay project(1959). The first stage of the Spatial Paris project was developed after 1960, with mushroom shaped structures, each housing 15-30k inhabitants, located in the wetlands area of Paris, regular and symmetrically shaped. In 1965 this concept got bigger- became a vast network of organically conceived cells, each made of a central round building and surrounded by mushroom towers, each cell can take 100k inhabitants. Paris under Seine consisted of an underground 14 lane highway, parking for 500k cars, public and private spaces, and a circulation route to link the city centre and west highways.
GIAP (Groupe International d’Architecture Prospective)- short-lived (1965-1970), founded by M. Ragon, the small group never developed a coherent program or shared vision, bringing together only briefly architects and artists with differing aesthetic and ideological perspectives on the nature and future of a utopian urban landscape. The group brought together architects, artists, engineers, urbanists, photographers, sociologists, biologists, critics, theorists, and researched new urban and architectural solutions. Its members included Ionel Schein, N. Schoffer, V. Vasarely, M. Ragon, Y. Friedman, G. Patrix, Walter Jonas.

Ragon believed that utopian and visionary projects should have been adopted by the government for the replanning of Paris and other cities. He created the term “spatial urbanism”. He wanted to shape spatial culture by providing a single reference point for prospective cities that could develop and disseminate models for environment, technology, art of tomorrow. He did it through exhibitions, publications, symposiums. After some years other theorists such as Abraham Moles and H. van Lier and the critic Pierre Restany entered spatialist scene.
V. Vasarely used a “planetary folklore” system of limited selection of geometric shapes and colors, which were used for prototype developing for facades.
Walter Jonas- famous for project “Intrapolis”, inverted the form of Maymont’s mushroom cities. They were conceived in groups linked together, representing closed social and economic space, designed for maximum density and privacy and had private gardens on each others roof.
N. Schoffer- participant in both GIAP and Groupe Espace. His most famous project- “Cybernetic city”- was a gigantic computer, the main function of which was the production of ambient space for variety of functions within separately distinguished interconnected buildings for work, leisure, shopping, pleasure.
Andre Bloc- was a French architect, sculptor, editor, and founder of L'Architecture d'Aujourd'hui and the Groupe Espace in 1949. In 1951, in company with several artists, Bloc formed the group Espace. Its goal was to bring the ideals of constructivism and neo-plasticism to urbanism and the social arena. Artists and urbanists such as Jean Dewasne, Etienne Bóthy, Jean Gorin, Félix Del Marle, Edgard Pillet, Victor Vasarely and Nicolas Schöffer were members of the group, which considered architecture, painting, sculpture and art in general as a social phenomenon.
Schulze-Fielitz in 1961 was a member of the Groupe d'étude d'architecture mobile (GEAM). In 1962 / 63 he collaborated with Friedman in the project of a city bridge over the English Channel, a multi-level space structure that combined train and car routes between France and England with aerial residential areas: a megastructure following-up the linear cities.
GEAM consisted also of Friedman, W. Ruhnan, G. Gunchel, C. Friemen, D. G. Emmerich.
Why was the spatial frame such a strong motif?
From the 19th century prefabricated systems were used to eliminate distinctions between art and science in architecture, synthesizing the organic and the man-made using structural principles from microscopic images of organic materials like leaves or bones.
Architecture Principe was formed in 1963 by the architect Claude Parent and the theorist Paul Virilio. They were joined by painter Michel Carrade and sculptor Morice Lipsi. The group had a major commission - the church of Sainte Bernadette in Nevers, brutalist, rounded and opaque, was a nihilist manifesto against the lightness and mobility of spatialists. Certain floor surfaces were inclined, adopting the main AP concept “function of oblique". The oblique plane was the main device for AP in architecture and urbanism, representing a return to bodily interaction with architecture that confronts inhabitants - one would be required to combat imbalance and climb and descend the inclines, and “habitable circulation”. Man was being put in action, made kinetic by the place it contains, his comfort with orthogonal surfaces was disrupted.
Another important project was “Conical City”, 1960. This project was based on classical megastructural devices: maximum liberation of ground and total sun exposure. Stepped sloping sides of the structures formed garden decks. Resisting the spatial logic of networks and integration into the landscape, self-contained, immovable objects were common for AP.

Consumer society was never visually embraced in France unlike Archigram, Hans Hollein in Austria or Superstudio. Archigram represented the distinct Americanisation of modernist discourse and structure itself. The French however were more concerned about man himself, while structure were made to be abstract. Similar projects and concepts were developed by Frei Otto, Rudolf Dornach, which were like those of the Metabolists or Spatialists, stacking prefab pods and setting cities afloat.
As a conclusion of this period, Piano and Rogers's Pompidou Centre (1977) was built and can be seen as a memorial to these megastructural aspirations, the emblem of all the French school did not achieve. They had a profound faith in technology, a flaw that blinded them to the changes implemented by mass culture. Their modernism was slow and lacked the speed of progress compared to the social sciences, and developed into a sense of isolation from architectural developments in other countries as well as an interior isolation that defined architecture’s distance from other intellectual enterprises.
Below is a short film on the Centre Pompidou made by Year 3 msa students 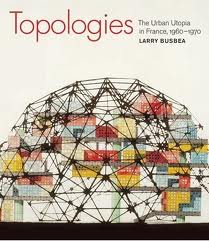 Posted by EAMONN CANNIFFE at 09:01