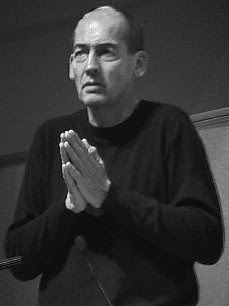 A précis by Emma Watson

Delirious New York: A Retroactive Manifesto for Manhattan is an engaging review of modern architecture and urbanism, setting a celebratory account of the surreal ‘culture of congestion’ found in Manhattan. Written while Rem Koolhaas was a visiting professor at the Institute for Architecture and Urban Studies in New York, and first published in 1978 - written during a period of financial crisis, with the city government narrowly avoiding bankruptcy through a substantial federal loan. At a time when confidence in the city is at an all time low, Koolhaas promotes Manhattan as a prototype of the modern metropolis, a collaboration of visionaries that strive to make life in the city a ‘deeply irrational experience’.

Declaring himself as the city’s ghost-writer, Koolhaas tells the story of Manhattan, a ‘mythical island’ and setting of an urban experiment in which the city becomes a factory for man made experiences, a laboratory to test the potential of modern life. He claims that ‘Manhattanism’ is the one urbanistic concept that revels in ‘hyper density’ and is fuelled by the splendours and miseries than come with the urban condition of man made living. ‘With Manhattan as an example, this book is a blueprint for a culture of congestion.’

The first chapter gives an overview of the history of the island, discovered in 1609, and depicted by a French artist as existing European components reassembled into a single location, ‘A Utopian Europe’. A utopia that is indifferent to topography, imposing the mental over the real. The grid system in Manhattan predicted the future condition of the city; its two dimensional restrictions gave way to three dimensional freedom, and the millions of people that it now houses was envisaged far before a tiny proportion were even present. Much like the grid, central park was created long before the programmes which fill it had been realised, quoted as ‘a colossal leap of faith, the contrast it describes – between the built and the unbuilt – hardly exists at the time of its creation.’

The book is a representation of the grid: ‘a collection of blocks whose proximity and juxtaposition reinforce their separate meanings.’ Each block correlates to a chapter; Coney Island, the Skyscraper, Rockefeller Centre and Europeans. 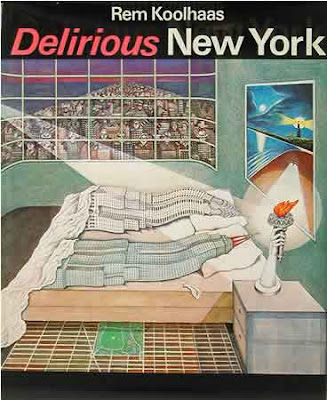 When Manhattan transforms from a city into a metropolis, Coney Island offers a resort, the ‘safety value of the worlds most highly charged metropolis’. As demand for escape increases; ‘the island is forced to mutate; it must turn itself into the very opposite of nature’, and instead of providing a release from the urban pressure, Coney provides intensification. The island’s artificiality becomes an attraction, counteracting the theatricality of the new metropolis with its unique ‘super-natural’. Coney’s amusement parks Steeplechase, Luna and Dreamland emerge, each more ostentatious than its predecessor, providing an infrastructure that made the island the ‘most modern fragment of the world’. Within Coney these three parks act as the testing grounds for a ‘new technology of the fantastic’, from which stem the strategies and mechanisms that came to shape Manhattan.

A ‘glorious whole’ – the skyscraper represents a coming together of a number of urbanistic breakthroughs. The tower was first tested on Coney with the ‘snow white pinnacles’ of Luna’s skyline. Now, in Manhattan, building became tower through the union of the elevator and steel frame, giving way to a construction which was ‘able to support newly discovered territories’, the further you ascend, the more you leave behind the undesirable circumstances below. Any site could now be multiplied ad infinitum to produce a proliferation of floor space. The skyscraper was a utopian formula which could be used an instrument for ‘a new form of unknowable urbanism’.

Manhattan’s architecture under went a lobotomy, ‘less and less surface represented more and more internal activity’. By separating the internal and external, the monolith of the skyscraper spared the outside world of everyday life, a shell housing layers of reality. Entering a building in Manhattan, even changing floors, could become an act of moving between worlds. The deliberate disconnection of storeys – ‘the vertical schism’ – accepted the skyscrapers instability in a definitive composition, succumbing to cultural potential. Each new building spanning a block, like a collection of urban islands, each striving to be a ‘city within a city’, all potentially at war with each other.

Media technologies were structurally integrated into the modern metropolis, as can be seen in the Waldorf-Astoria Hotel, Daily News Building, and most importantly the Rockefeller Center. Like the speculative Manhattan grid, the Rockefeller Centre was ‘an artificial domain planned for non existent clients’, it finds a perfect occupant in the Radio Corporation of America and its subsidiary NBC and their state of the art production facilities. The theatricality that was once experienced on Coney Island, and then of the interior activities of the skyscraper, could now be fabricated within the Centre and transmitted across the world, ‘the nerve center of an electronic community that would congregate at Rockefeller Center without actually being there. Rockefeller Center is the first architecture that can be broadcast’. 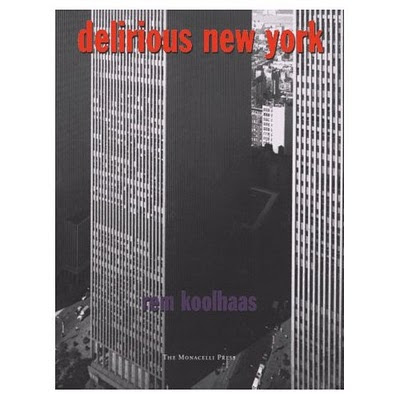 Manhattanism is ‘congestion for congestion’s sake’, and the reason why any of Le Corbusier’s schemes failed to be realised in Manhattan. Radiant City, which Koolhaas describes as ‘a majestic flow of humanist non sequiturs’, is a proposal to erase all the utopian urbanistic ideals upon which Manhattan was built and replace them with a uniform set of towers – Cartesian skyscrapers - evenly planted in green spaces. His desire was to purify the city, and give its residents access to light and air. His urban form removed the congestion, offering only the efficiency of banality in exchange. This congestion, in a realm divorced from reality, forces the metropolis ever upward into the speculative. There was no place for Manhattan’s technology of the fantastic within the Cartesian skyscraper, for Corbusier; ‘use of technology as instrument and extension of the imagination equals abuse…for him technology itself is fantastic’. The Cartesian skyscraper had been stripped of the stone cladding that enclosed the Manhattan skyscraper and allowed the ‘ideological hysteria’ of the internal architecture to thrive. Koolhaas concludes that the glass walls of Corbusier’s skyscraper enclosed ‘a complete cultural void’.

During these playful journeys through Manhattans history, Koolhaas advocates his duty to modernity, if not to architectural modernism as a movement. He focuses on Manhattan’s ability to invent the ‘modern’, creating a parallel to the sober and abstract ideals of Le Corbusier’s European Modernism. The city’s buildings are not advocated as architectural masterpieces, but the tools for reinventing city life. 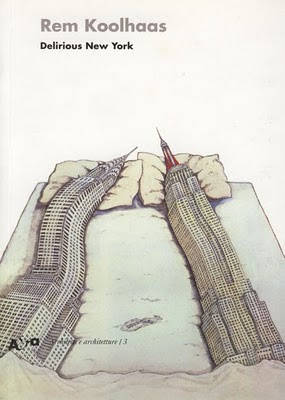 Posted by EAMONN CANNIFFE at 12:21