GET OVER IT! An MA A+U Symposium 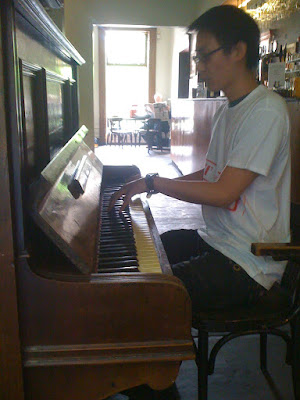 The second annual student-led MA A+U Symposium was held on 12 May at sandbar in Manchester. The venue was kindly donated by MA A+U student Stephen Gingell.

This year's theme concerned the ways by which British cities might overcome the current economic downturn and reinvent themselves.

The event was chaired by author and journalist Owen Hatherley who outlined the the social and economic context of the last few years before introducing the first speaker Dr. Mark Jayne, an urban geographer at the University of Manchester. Appropriately enough given the venue Mark's presentation was the relationship between drink and British urban life representing what is often problematic as a negative aspect of the contemporary condition as an activity through which social life is constructed.

The second presentation of the day was by Mark Lemanski of muf architects who discussed a number of the practices's public realm projects in London including their award-winning Barking Town Square.

A brief debate with interventions from the floor preceded lunch when entertainment was provided by MA A+U student Xu Chen at the sandbar's piano.

After lunch Rose Marley spoke about The Sharp Project in Manchester, a large scale digital facility intended to help regenerate New East Manchester. This presentation raised the issue of new educational and employment patterns which would create profound change in the life prospects of some of Manchester's most marginalised citizens.

Mid afternoon was anchored by Geoff Denton of Stockholm-based White Architects who talked about their competition winning project for Salford House 4 Life. Against the trend of anonymous apartment blocks the project proposes low-rise, robust family housing around communal spaces which offer a utopian prospect for future urban wellbeing.

The day was concluded by Elizabeth Varley from techhub an enterprise at the heart of 'Silicon Roundabout' who emphasised the global potential of the digital economy in turning the urban situation around.

The day provided a great opportunity for groups from different backgrounds and disciplines to debate the problems and possibilities of british cities in quite a tangible way. New connections were made and new ideas fostered ...

Posted by EAMONN CANNIFFE at 09:55