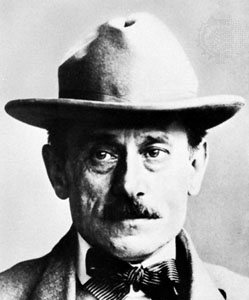 Tony Garnier's Une Cite Industrialle is one of the most comprehensive ideal plans of all time.Published in 1917, it is not only an outstanding contribution to architectural and planning theories but also a sensitive expression of thought and cultural conditions of its day. Dora Wiebenson's framing of the book focused on the Cite’ s lesser-known role as a product of its cultural context, and as a bridge between nineteenth and twentieth century planning and between academic and non-academic theories and techniques.

INDUSTRIAL REVOLUTION IN EUROPE
The end of the nineteenth century was a time of great change throughout Europe. The advent of industrialisation altered the landscape of the city forever. Many of the changes were not for the better and living conditions in industrial cities steadily deteriorated. The Industrial Revolution had the effect of bringing more and more people from the countryside into the heart of the city looking for work. Such dramatic over-population and unrestricted urban growth led to slum housing, dirt, disease and a lack of communal green spaces within the city landscape. Modern urban planning arose in response to this disorde. Reformation of these areas was the objective of the early city planners, who began to impose regulatory laws establishing housing standards for housing, sanitation etc. Urban planners also introduced parks, playground in city neighbourhoods, for recreation as well as visual relief. The notion of zoning was a major concept of urban planning at this time.

WHO WAS TONY GARNIER?
Tony Garnier was a French architect born in Lyons in 1869 and it is clear that the city and surroundings had a great influence on him. Whilst growing up Lyons was an industrial centre for textiles and metallurgy, the two industries catered for by Garnier s proposal for his industrial city. Garnier studied at the École des Beaux-Arts in Paris and in 1901 won the prix de Rome competition and was sent to the French Academy at the Villa Medici. It was here where Garnier started to formulate his proposal for the Cité and in 1901 Garnier sent back the proposal to the École. However, the École refused to exhibit the work and instead insisted that Garnier produce the work on classical and renaissance architecture. Garnier continued to work on his proposal alongside more traditional work and was eventually able to exhibit his work in 1904. Afterwards, Garnier continued to develop his plan culminating a two-volume work published in 1917.

REGIONALISM
By the end of 19th century the theory of urbanism had expanded far beyond the unitarian and geographical concerns to include the total regional context in which the city was situated. Major reports on municipal reforms in the last part of the 19th century were made by individuals like Albert Shaw, who basically stressed the organic relation of the city to the country and predicted their eventual integration. These theories of regionalism attained their greatest popularity in England. Chief among them was Pattrick Geddes (1854-1932). Garnier's philosophy in the Cite Indutrielle was similar to that of Geddes in the emphasis on city decentralization, it being developed in relation to the industries, occupants and customs of the surrounding region.
Geddes's theories were considered similar to those expressed by Ebenezer Howard with regard to his Garden City. Two of Howard's basic assumptions were also stressed by Garnier: the emancipation of man from the monotony of his labour in order to take on more fruitful occupations and the view that all men are inherently cooperative and equal. The schemes are also related in such details as the inclusion of electric energy, the emphasis on planting within the city and widely accepted 19 th century ideal of a house and garden for each family.

In his preface to Une Cite Industrialle, Garnier specifically included most of the major elements of contemporary regionalist theory; the Cite was to represent one of a federation of cities, among which a bond would be created through emphasis on communication and exchange of goods. Local historical and botanical museums for regional expositions and a school of arts and industries were to be included in this project. Local crafts were to be taught. Nearby water power was to be used.
Deliberate proximity of the Railway Station to the old town to make it easy for the visitors, should be understood as an interpretation of the regionalist theory of preserving and promoting an interest in local monuments. However regionalism was never associated with socialism, and thus in this major philosophical tenet the Cite industrialle doesn't conform to the regionalist thought. Individual imitative is not stressed in the City, property is owned in common and public conveniences are maintained for benefit of all. Garnier had worked in the workers quarte of the city, some of his later planning may reflect social doctrines to which he was exposed while there. In his city employment services and free hostels as well as meeting rooms were created for workers' syndicates that a socialist government is presupposed. Many public facilities were provided like slaughter houses, flour mills etc, and equality to both sexes in education etc. 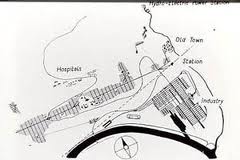 SOCIAL UTOPIAN CONCEPTS
At the end of the 19th century it was believed that many social reforms could be achieved gradually through moral and intellectual education leading to a future ideal state. Garnier believed in the basic goodness of man :when asked why his city contained no law courts, police force stations, jail or church he is said to have replied that the new society governed by socialist law would have no need of churches as capitalism would be suppressed.
In the Utopias of this period, fundamental, natural and primitive conditions were stressed; the emphasis on exercise, health, and physical well-being was a corollary to the awakening interest in natural life. Garnier‘s inclusion of a large public area for sports and spectacles in his city related to early utopian philosophy, pagan antiquity and love for games.

LYONS BACKGROUND
Lyons had undergone extensive urban remodelling from mid 19 century. Here public schools began, syndicates were formed, a new industrial quarter was planned. Reinforced concrete was used for industries as well as housing. In 1894 the 15 th congress of the Societe Francaise Geographique met in Lyons and established a program for the region, including construction of public utilities and dams. He was emphatic about separating the functions of the city from each other in order to allow for independent expansion, functional convenience and ease of transportation. Garnier stated in his preface that the siting of the city was determined by the location of water, the source of power.

THE CONCEPT
Garnier ‘s proposal was an industrial city for approx 35,000 inhabitants situated on a area in southeast France on a plateau with high land and a lake to the north, a valley and river to the south. Une Cite industrialle is a well coordinated and monumentally conceived plan placed in a park like setting where both the classical spirit of the academic tradition and the primitive simplicity of utopian ideas is demonstrated. In his proposal, Garnier tried to take into account all aspects of the city including governmental, residential, manufacturing and agricultural practices. The various functions of the city were clearly related, but separated from each other by location and patterns.
The public area at the heart of the city was grouped into 3 sections: administrative services and assembly halls, muesum collections and sports facilities.

The residential area is made up of rectangular blocks running east-west which gives the city its characteristic elongated form. The residential districts are the first attempt towards passive solar architecture. Garnier had energy efficiency in mind as the city was to be powered by a hydroelectric station with a dam which was located in the mountains along with the hospital.
The city was completed by a railroad d station to the east. 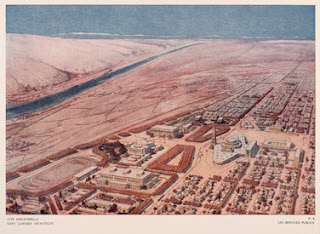 THE INFLUENCE OF JULIEN GAUDET
Garnier found a sympathetic point of view in the teaching of Julien Gaudet, a professor of architectural theory at the Ecole. Guadet's concern with rational planning, based on axiality and clear articulation of the separate parts of the building and his interest in the relationship of architecture to contemporary functions. The programme for the Cite hospital is close to Gaudet’s analysis of hospital planning. Gaudet favoured an arrangement of separate pavilions including separate building blocks for different functions.

ZONING
The main factory is located in the valley at the confluence of the stream and river. A railway passes between the factory and the city, which is on a plateau, and further up are the medical facilities.

In the homes, the rooms should have at least one large window oriented south for the entry of sunlight The land for the construction of the residential homes, are initially divided into 150 meters from east to west and 30 meters from north to south, dividing into lots of 15 by 15 meters, with one side facing the street.

Primary schools are scattered throughout neighbourhoods and in the northeast corner are the secondary schools.

CONCLUSIONS
Garnier’s Cité Industrielle was never built but echoes of his vision can be seen in Lyon where the mayor appointed him the city architect in 1905, a position he held until 1919. The most important work to emerge from his Cité Industrielle was the large stockyards complex, the stadium, the Grange Blanche Hospital and the housing project known as Les États Unis. The most important connection of Garnier with later planners is definitely through Le Corbusier. Le Corbusier was the first well-known architect to discuss Garnier's work and possibly the reason why Garnier became known as a pioneer of modern architecture and urban planning.
This is not to say that Garnier's vision of urban utopia is neither important nor successful. Much of what he proposed is at the least relevant today and there is no doubt that at the time someone with Garnier's vision was required to propose what he saw as a solution to the problems that faced society at that time.
This brings me back to the start, a utopia by its very nature is impossible to realise. Without people proposing their visions of a Utopia there can be no progress as out of generous dreams come beneficial realities.

In his praise, Edouard Herriot said:
“This builder, this realistic person, was spontaneously human. His sensitivity was only equal to his modesty. His culture proved to be often surprising. Indeed, Tony Garnier was a master, with all the nobleness and intelligence included in this word. A master, which means a guide and an example… But the Man was as admirable as the scholar; his moral qualities were equal to his genius.” 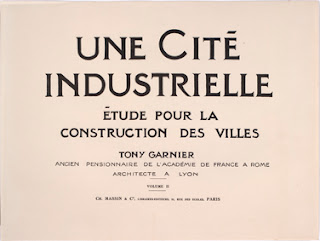 Posted by EAMONN CANNIFFE at 04:02